By Gary Myers, Daniel Conway & Associates
February 01, 2017
I was recently at Fort Carson, Colorado. I came across a flyer from the Department of Justice titled "False Allegations of Adult Crimes Reference Guide." The flyer has prompted me to write about false allegations and deception. This Part I will provide the data from the Department of Justice. The data apparently came from the FBI Behavioral Analysis Unit and National Center for the Analysis of Violent Crime.

The primary motivations and indicators section below provides a great resource for closing arguments in military court-martials.

"Offender Characteristics
-Most likely white (93%)
-Majority are female (73%) male (27%)
-Average age was 30 and the most frequent age was 41
-At the time of the offense, 27% had documented mental illness (depression most common), all female
-At least 43% had a HS education/GED

-27% have made at least one prior false allegation; rape/sexual assault (10%), stalking (10%), physical assault (7%), threats (7%)
-23% have been arrested at least once including charges such as theft/larceny, drugs/narcotics, trespassing, assault/battery

-Over half (53%) of the cases involved two types of offenses.

-In 73% of cases, there are indications of pre-planning/preparation

-Half of the offenses involved more than one location

-Evidence of physical trauma is reflected in 30% of the cases to include blunt force trauma, edged weapon, ligature strangulation, gunshot wound, burn (fire or chemical)

-Sexual trauma is rare; however, when observed there is trauma to the vaginal cavity, foreign object insertion or breast/nipple lacerations

-Evidence of staging in more than half the cases (60%) to include ransacking, vandalism, threat letters, burglary, use of an explosive device, and carjacking

Interview Strategies
-The interview strategy is depending on the motivation of the offender. An investigator would approach an offender motivated by an internal need for attention/sympathy far differently than one motivated by financial gain or revenue
-Emphasize the life problems of the offender

Possible Indicators of False Allegations
-Inconsistent statements by the offender
-Deception on polygraph
-Witness statements that conflict with the offender
-Lack of plausibility in the deception of the reported offense
-Lack of substantiating forensic, physical, and/or medical evidence" 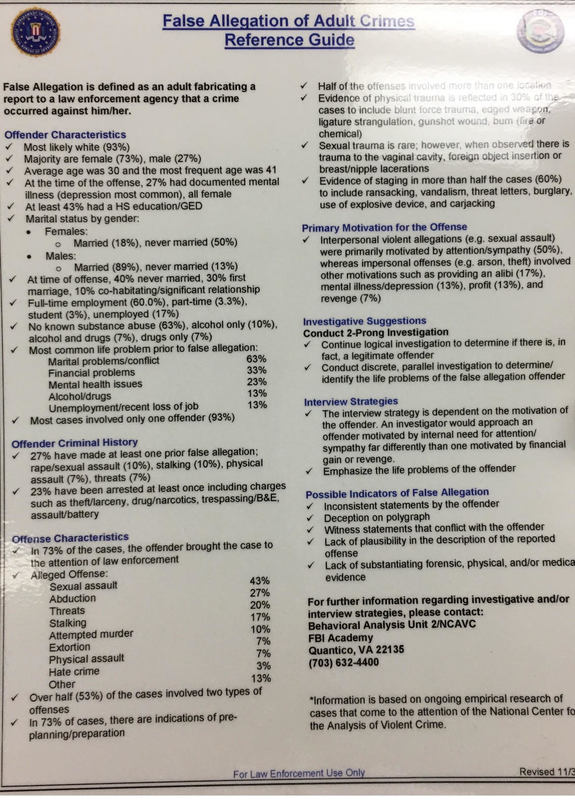