On 4 March 2007, Marine Corps Special Operations Command members came under attack during a deployment to Afghanistan. After engaging the threat, the Afghanistan Independent Human Rights Counsel later alleged that upwards of 19 civilians were killed and 50 were injured.

The commander of the unit, Major Galvin, is asking Congress to require the Commandant to officially vindicate the Marines. See story. I would say it is about time.

I represented one of the Marines involved in engaging the enemy. Through aggressive representation and case investigation, the Marine was never charged. It was a highly political case that followed on the heels of allegations involving Haditha. But, these were Special Operations Command Marines. NCIS was able to mistreat and bully the young Marines in Haditha. The MARSOC Marines were more disciplined.

They all learned the lessons of Haditha and only minimally cooperated with NCIS to provide the information necessary to show that they acted in accordance with the rules of engagement.

Basically, a suicide bomber had wedged himself between the first and second vehicles in a 6 vehicle convoy. Here is a graphic I created back in 2007 while investigating the case. 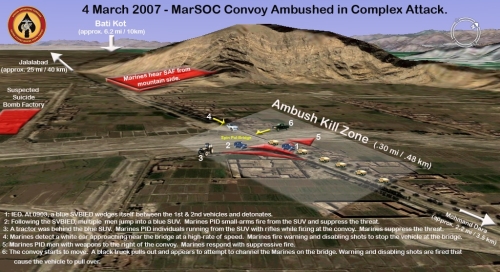 The suicide bomber detonated the explosion nearly straight up in the air. It was a miracle that no Marines were killed or seriously injured. There was literally minimal damage to the vehicles. The Human Rights report was misleading in nearly every respect about the engagement.

This blog certainly supports efforts to vindicate the Marines. They were well-trained, disciplined, and performed their job honorably.
Categories:
Related Posts
/