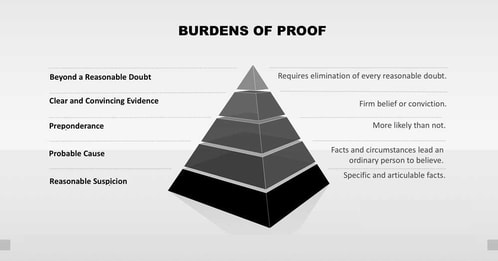 Over the past few we've seen an uptick in search terms for our law firm related to false allegations of sexual assault. I've written about this topic in the past. With the recent confirmation hearings of Justice Kavanaugh, this is a good time to revisit the topic.

I'm writing about this topic from the perspective of a defense attorney. Our firm has represented military members accused of sexual assault as well as victims of sexual assault. We do our very best to help those that ask us for help. It's that simple.

In terms of statistics, one study is "False Allegations of Sexual Assault: An Analysis of Ten Years of Reported Cases." That study puts the prevalence of false allegations between 2% and 10%.

Another one of the most cited articles is in the March 2012 publication of the Journal of Forensic Psychology Practice called "Pathways to False Allegations of Sexual Assault." The full citation is at the end of this blog.

The authors rightly note that in cases involving questions of consent there is rarely any unequivocal evidence, which makes discerning the truth challenging. The authors also rightly observed that sometimes there can be pathways to false allegations that result from mental health issues.

The authors proposed 11 forensic psychology pathways (processes) to false allegations of sexual assault that are helpful to defense lawyers. I have taken those pathways and added some considerations to help provide a framework for lawyers.

1) lying;
(a) core discrepancies in the narrative;
(b) secondary gain.

2) implied consent (and mistake of fact);
(a) whether the alleged victim engaged in behaviors that can plausibly and reasonably be interpreted as providing consent.

3) false memories;
(a) were suggestive interviewing techniques used;
(b) did government officials push the alleged victim to try and remember information harder; and,
(c) did family members or friends implant subtle incorrect information;

4) intoxication;
(a) evidence of voluntary behaviors and choices;
(b) evidence of high levels of cognitive function; and,
(c) confabulation to fill gaps in memory.

5) antisocial personality disorder;
(a) failures to conform to social norms regarding lawful behaviors;
(b) confirmed deceit or fraud;
(c) irritability and aggressiveness; and,
(d) lack of remorse.

6) borderline personality disorder;
(a) quickly switching from idealization to devaluation of relationship; and,
(b) evidence of extreme feelings of abandonment.

7) histrionic personality disorder;
(a) always has to be the center of attention;
(b) frequently inappropriate and provocative;
(c) style of speech that lacks details;
(d) easily influenced; and,
(e) commonly views the relationship as more intimate than they really are.

In another blog, we'll discuss the research on blackouts, memory, and false memories as it pertains to military sexual assault cases.