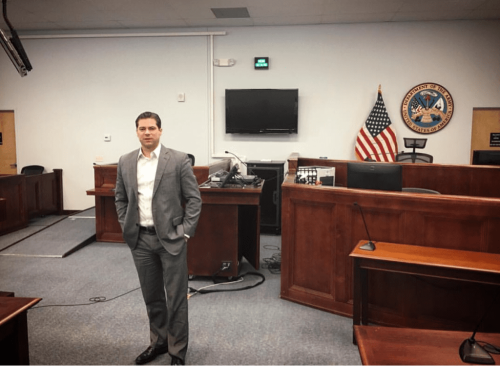 Mr. Conway following a full acquittal at Fort Carson.
It's that time of year where we can look back and evaluate our results in trial for the year. On our results page, we've posted short summaries of all of the courts-martial that Mr. Conway appeared in.

We may be the only firm that provides end of year litigation statistics. We do so with the standard caveat. Every case is unique and different. We do not guarantee outcomes. These are simply metrics to help us evaluate our own skills and help you select counsel.

As we look at our results for the year, some cases are ongoing, so we'll only include cases where charges were - in fact - preferred and completely resolved in 2016. We had several cases where we avoided charges altogether. Those are not included. Generally, we want to evaluate cases where Mr. Conway appeared before a fact finder and called witnesses.

Mr. Conway appeared on record in 22 courts-martial that had charges preferred and went to completion in 2016. Of those 22 cases, 16 (72%) went to a full trial. The remaining 28% were dismissed after or just before pretrial hearings for a variety of reasons (e.g. no evidence, reduced to a reprimand, reduced to separation board, resignation, separation in lieu of trial).

In a statistic we're extremely proud of, 9 out of 14 trials (64%) were fully contested and resulted in a full acquittal. That's nearly two out of three contested cases. Four cases (28%) were mixed verdicts. Of the mixed verdicts, only one case resulted in confinement and/or discharge.

One case was a full conviction for cocaine use (no confinement or discharge).

Here is a breakdown of the cases we tracked to completion to get these results:

7 Jan: Navy officer drug case out of Virginia. Not guilty.

16 Jan: Louisiana National Guard officer case involving conduct unbecoming, false official statement, and travel fraud. We were prepared for trial, but the officer's civilian employment made a resignation highly desirable. We were able to negotiate a resignation with a general discharge.

20 Jan: An Army officer overseas was accused of sexual assault. The divorce was toxic enough that we were able to avoid a court-martial. The command did give the officer a reprimand.

29 Jan: An Army Soldier in South Korea was accused of sexual assault. Mr. Conway appeared in the Article 32 Investigation. The alleged victim actually testified. Mr. Conway obtained a recommendation of no probable cause. The Soldier accepted a chapter for personal reasons and flowing from some fraternization allegations.

10 Feb: An Air Force Technical Sergeant at Moody was accused of sexual assault by his ex-wife. She testified at the Article 32 Investigation. We got the charges dismissed after the Article 32.

2 Mar: An Army officer in DC was accused of assaulting his wife. It was an aggravated assault charge. There were photos of the injuries and she ran across the street to immediately report the injuries. The officer was found guilty of a lesser included offense. Mr. Conway got a conduct unbecoming charge dismissed. The officer was retained.

23 Mar: An Airman at Barksdale was accused of forcible rape. He was found not guilty.

6 Apr: An Air Force Staff Sergeant at Mountain Home faced 27 charges of sexual assault and assault by his ex-wife. We got 4 charges dismissed. He was found not guilty of the remaining 23.

24 May: An Army Sergeant First Class was accused of sexual assault by a staff sergeant in Germany. He was found not guilty.

8 Jun: A Sailor in New Jersey was caught on tape stealing from the post-exchange. Larceny charges were preferred. Mr. Conway negotiated a separation in lieu of trial.

16 Jun: An Army sergeant in Vincenza, was accused of disrespecting an officer and other allegations involving 3 females. We linked the 3 females together in a conspiracy. The sergeant was found not guilty of everything.

19 Jul: A Marine corporal at Miramar testified positive for a really high amount of cocaine. He was found guilty. He got no confinement and no discharge.

5 Aug: A Marine corporal was facing a court-martial for steroids. We got the charges dismissed and the Marine went to an administrative separation and got a recommended suspended general discharge.

15 Sep: An Army Master Sergeant at Fort Bragg was accused of raping his daughter - among other things. He was found not guilty of everything.

6 Oct: An Army sergeant at Fort Hood was accused of child abuse - among other things. He was found not guilty of everything.

13 Oct: A Marine male lance corporal was accused of abusive sexual contact of 3 male Marines in their sleep. We got a few charges dismissed. Ultimately, we negotiated a time served deal. The Marine also received a discharge.

2 Nov: An Army sergeant at Fort Benning was facing failure to report, falsifying PT scores, and a litany of other charges. He was found not guilty of everything.

10 Nov: Negotiated guilty plea for an officer who falsified documents to receive the bronze star and many other awards. 30 days confinement and a dismissal.

17 Nov: A major at Fort Belvoir was accused of abusive sexual contact by a staff sergeant. He also faced communicating a threat and fraternization charges. He was found not guilty of everything but the fraternization. He received a reprimand from the jury.

15 Dec: An Army captain at Fort Carson faced allegations of abusive sexual contact by a sergeant. He was found not guilty of everything.
Categories:
Related Posts
/