You Cannot Be Compelled to Incriminate Yourself

The statements of an accused are excludable from a court-martial or administrative separation board if they are obtained in violation of the privilege against self-incrimination under the Fifth Amendment to the United States Constitution, Article 31 of the Uniform Code of Military Justice, or through the use of coercion, unlawful influence, or unlawful inducement. Mil. R. Evid. 304 (c)(3).

Because of the "uniquely coercive factors present in a military environment," this privilege against self-incrimination is even more highly guarded in military than in civilian contexts. United States v. Ravenel, 26 M.J. 344, 349 (C.M.A. 1988). 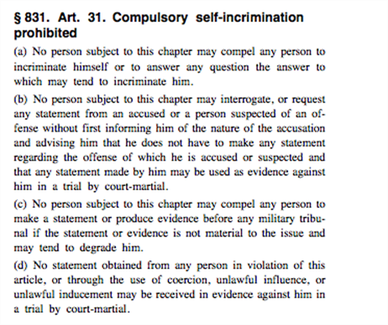 Firstly, the United States Constitution and Article 31 (b) of the UCMJ require rights advisements before interrogations or requests for statements. The Court of Appeals for the Armed Forces (C.A.A.F.) has repeatedly recognized that rights advisements have a particular significance in the military because the effect of “superior rank or official position upon one subject to military law, [is such that] the mere asking of a question under [certain] circumstances is the equivalent of a command.” United States v. Harvey, 37 M.J. 143 (C.M.A. 1993). Where an earlier statement was involuntary because the accused was not properly warned of his Article 31 (b) rights, the voluntariness of the second statement is determined by the totality of the circumstances. United States v. Brisbane, 63 M.J. 106, 114 (C.A.A.F. 2006). Further, Congress has enacted the exclusionary provision of Article 31 (d) as a strict enforcement mechanism to protect a service member’s Article 31 (b) rights. United States v. Swift, 53 M.J. 439, 448 (C.A.A.F. 2000).

The Article 31(b) warning requirements can apply to civilian investigators working with the military. Mil. R. Evid. 305(c) applies to civilians (1) “[w]hen the scope and character of the cooperative efforts demonstrate that the two investigations merged into an invisible entity” and (2) “when the civilian investigator acts in furtherance of any military investigation, or in any sense as an instrument of the military[.]” United States v. Payne, 47 M.J. 37, 42 (C.A.A.F. 1997) (citing United States v. Quillen, 27 M.J. 312, 314 (C.M.A. 1988).

In determining whether a civilian investigator is acting as an “instrument of the military,” a key consideration is whether there is any “degree of control” by the military over the civilian investigator. Payne, 47 M.J. at 43. There must be more than a mere cooperative relationship. In Payne, the court found that a civilian polygraph examiner was not required to issue article 31(b) rights. 47 M.J. at 43. There was no cooperation or coordination between CID and DIS, beyond a preliminary release of records. Id. The DIS (civilian) and CID investigations in that case had different purposes and scopes. Id. Accordingly, with minimal coordination, the DIS agents were not acting as instruments of the military. Id.

The Fifth Amendment and Miranda Warnings

In California v. Beheler, the suspect called the police to report a homicide that he was involved with. 463 U.S. 1121, 1122 (1983). He voluntarily accompanied police to the police station for questioning. Id. The police never issued his Miranda rights. Id. He gave a brief interview, less than 30 minutes, and then left freely. Id. The Court found that Miranda warnings were not required. Id. The Court noted that although the circumstances of each case must influence a determination of whether a suspect is "in custody," the standard is actual custody or restraint that is the functional equivalent of formal arrest. Id. at 1125.